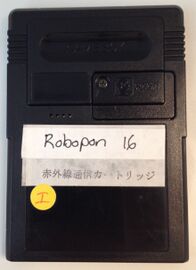 Robopon is one of those overlooked turn-of-the-millenium games that has attracted a cult following of folks like me that are rather obsessed with it.

The debug menus took a long time to be discovered, only being found in 2016 by CounterDiving of TCRF. The Nintendo Gigaleaks gave us the English Star Version ROM.

But the ultimate treasure for any Robopon fanatic is the Sun Version prototype cartridge, found by Deoxyz of Hidden Palace, purchased on ebay and dumped in 2019.

Just take a moment to absorb the beauty of this cartridge.
This is the holy grail of any nerd. Deoxyz didn't provide too much unformation on the cartridge itself, but translated the text to Infrared Communication Cartridge

I got a hold of the ROM image and one of the first things I had to try was accessing the debug menu, however it seems that it is identical to the final game's debug menu.

Deoxyz comments that the biggest differences are relatively minor - dates are given with "th" or "st", some text in the game is slightly different. Something interesting to me is that a lot of the characters talk with more 70's slang, often ending sentences with "man", refering to cash as "dough" etc, probably a reference to the fact that the game, being based on Robocon from the 70's, likely is meant to take place in that era.

WATER is refered to as H2O
There is a software called BEAR, and BUG

more will be added here as I dig through the prototype.