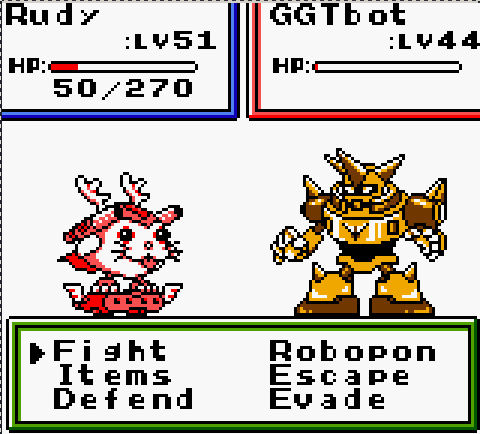 
Robopon follows the same basic formula of most JRPG's (or as Wikipedia calls them "Eastern Role-Playing Games"). There is an overworld to travel around, with new locations being unlocked. There are random encounters with Robopon, primarily in dungeons. Random encounters or battles lead to a turn-based strategy segment where you can decide to fight, use items, swap party members, try to escape - however, unlike in Pokemon you can also use your turn to do things like Evade or Defend.

Many aspects of the 1st generation of Robopon games reveal the fact that the game was programmed by veteran RPG designers who notably worked on the enormously successful Tengai Makyo games. It is pretty clear that there was some tension between the developers' experience and motivation to design an extremely rich and complex strategy game and the publishers' and product managers' desire for a simplistic monster-collecting clone game marketted to a very young audience to make some quick cash.

The game leaves one wondering what could have been if the developers hadn't been constrained by the lightning-fast production cycles of the late 90s' game market. The developers clearly had a passion for Robopon and wanted to make it the best that it could be, seeing the opportunity to make not just a cheap Pokemon clone, but an deeply inspired world that stands on its own.

There are 3 types of robopon: Arm, Move and Boot. Arm and Move can learn their own types of software, while Boot can not learn any software but have high base stats.

In the first games some Robopon have more granular types than Arm, Boot or Move: Beast, Theif, Skybt, Gunmn, Fight, Lndbt, Knght, Healr, Punch, Mage and Seabt. As far as I can tell currently, Theif types do have a chance of stealing an item from the opponent in battle, but I haven't found much more information yet on the others. 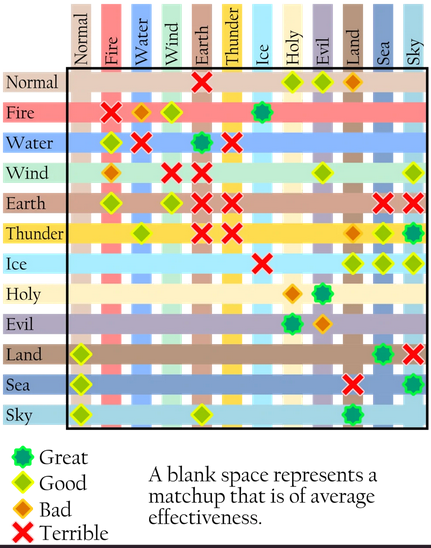 Robopon come with one attribute, but they can learn the moves of almost any other attribute - so for instance you could teach an Evil Robopon Sky type moves, even Holy type moves etc. If a Robopon's moves match their attribute, the moves do more damage, but as we'll get into later, variety can be really advantageous depending on your playing style.

Robopon's moveset algorithm is stunningly complex. Rather than Robopon having a standard moveset, their moves are determined by combining different parts and software. Parts such as Bazooka or Death-H combine with Software like Fire or Ice or Land to produce bespoke movesets. While it is generally the case that Robopon should have software that match their attribute, for the most part any Robopon can learn moves of any attribute, making battles very unpredictable and challenging, and allowing the player to fine-tune and customize their Robopon far more than is offered by Pokemon or other RPG's.

For a chart of special software combinations for moves, see the Moves Page.

It can all honestly be very confusing, there is a dizzying amount of variety.. The best way to do things is to just experiment with combinations of RP, parts & software until you come up with combinations you like. For the most part, it is up to preference and all of the mechanics are very well balanced - you will rarely run into a battle that is just completely unbeatable and overpowered. On the other hand, this can be frustrating when YOU want to be the one that is overpowered. Battles are actually difficult, and there is also a lot of luck to them, which in my opinion makes it more realistic, fun and interesting.

THE FOLLOWING IS A HUGE TABLE, be warned. click to expand.